Clean lines with the emphasis on the material is a big trend in kitchen and dining design. The inherent beauty of wood with an element of history makes reclaimed wood an attractive option. 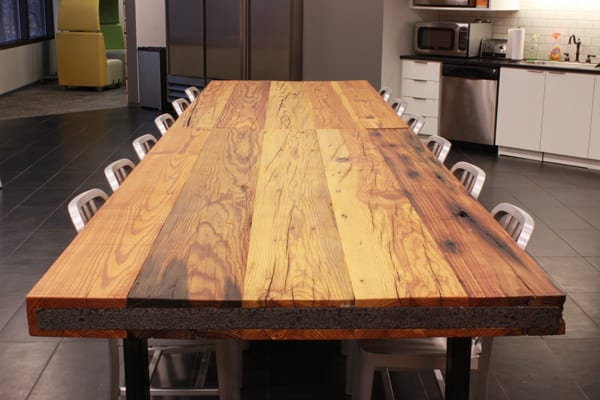 Reclaimed wood with all it’s character is a great choice for table tops as well as kitchen counters. This over-sized table of 3 inch thick reclaimed heart pine is a great example. 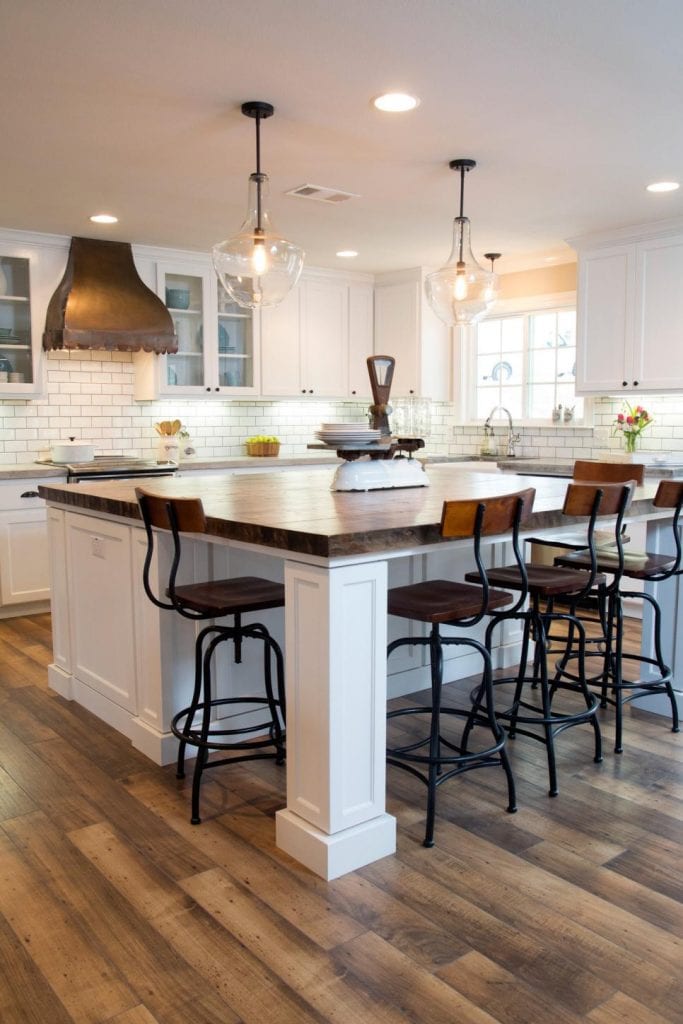 An old freight car floor is transformed into an exquisite island top by Joanna Gaines of the HGTV series Fixer Upper.

Joanna Gaines of HGTV’s Fixer Upper series used the old floor of a freight car to create this kitchen island top. The scars and marks of hard use give the top a completely unique character. Sanded and sealed to make it practical as food prep and service area this old lumber will serve for decades more in its new role as the center for family gatherings. 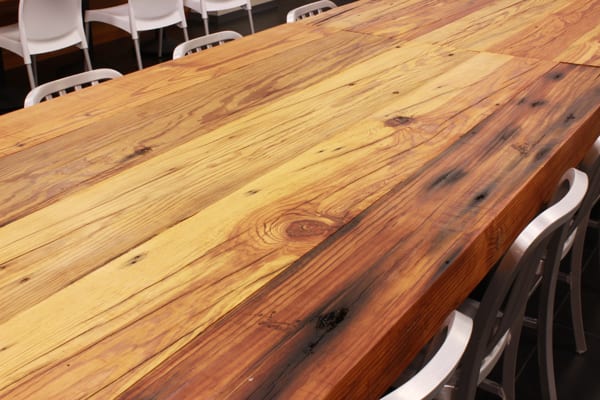 Holes from old spikes and other scars are marks of character in reclaimed lumber.

Using reclaimed wood means embracing the history of the wood. Cracks, dents and nail holes are all just part of the charm. There are occasions when these characteristics are so pronounced that the wood has to be helped along into its second life by the use of things like pegs, metal, strapping or butterfly joints for stabilization. 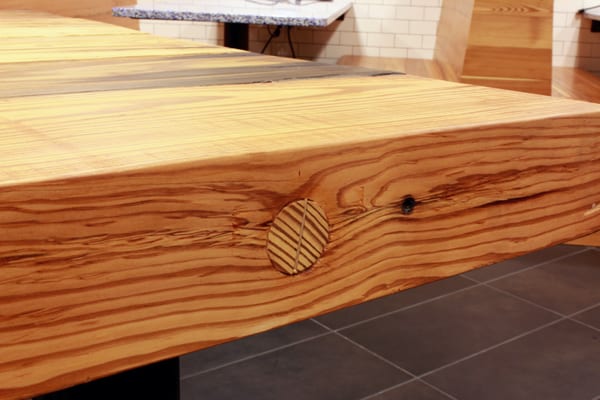 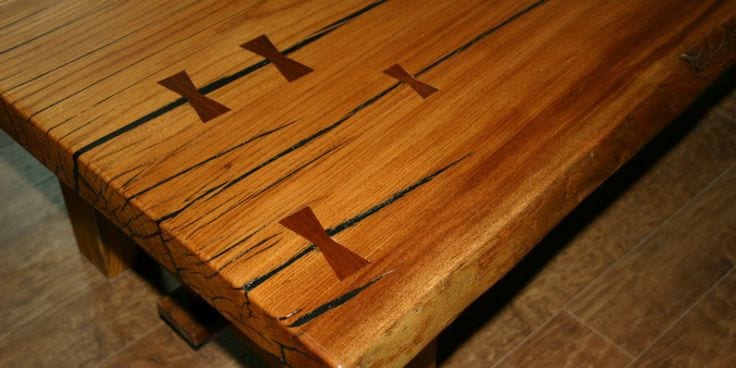 Butterflies in a darker wood stabilize this reclaimed table top from further cracking. 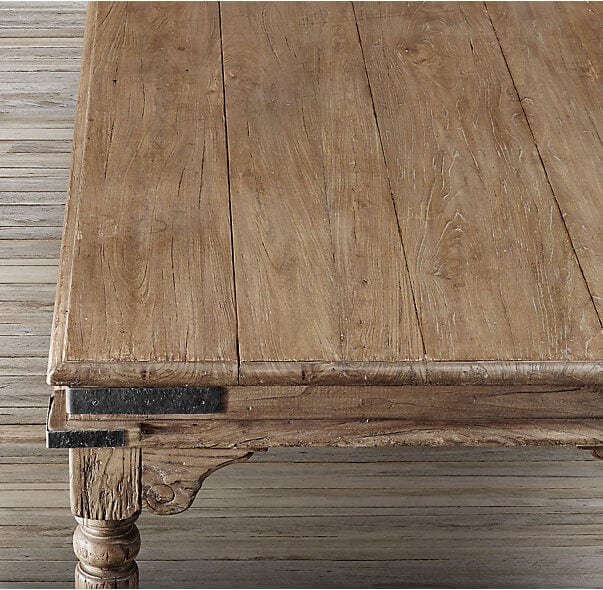 Metal corner strapping on tables from Restoration Hardware accent the texture of the aged wood.

Antiquity has always been desirable in furniture and cabinetry. The difference recently is the shift from prizing a well polished case clock or tea table for their pristine condition to embracing the damage and scarring of long use for its’ own sake. Companies like Restoration Hardware have made this look a big part of recent collections.

Where Does Reclaimed Wood Come From?

The leading species of wood being reclaimed are heart pine and oak. They were widely used in construction of farm and factory buildings, warehouses, warfs and homes in the 18th, 19th and 20th centuries. When the country was young large hardwood trees were abundant and affordable. Two inch thick planks of solid oak were often the go-to material for barn doors or factory flooring. Where we would use a sheet of plywood an early farmer would have built shelter for his animals of solid maple or some other wood we now consider far too nice for that sort of thing. 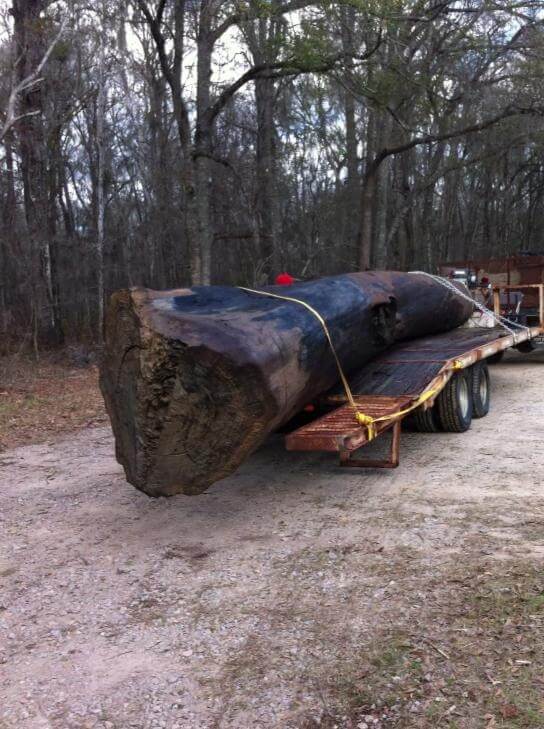 Before the time of cheap and rapid transportation felled trees were floated down the rivers to sawmills and ports. Many of those logs were lost along the way due to underwater obstructions and have been on the river bottoms ever since. These are called “sinkers” and have become another source of reclaimed wood. Because many of these are larger than current crops of trees the lumber is available in wider slabs which are valued for special applications. Some of these trees were over six feet in diameter which would be nearly impossible to find now. 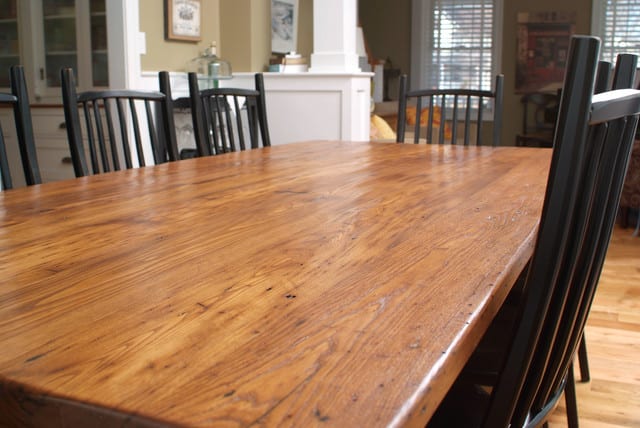 Wormy chestnut is the rock star of reclaimed wood.

Another sought after wood is American Chestnut. Virtually all the living population of this species was wiped out by a blight in the early 1900’s. There’s little on the market with no reorders available and the price is high. Often called wormy chestnut and prized for the evidence of the insects who moved into the wood once the trees died, this is a look totally unique in the market. 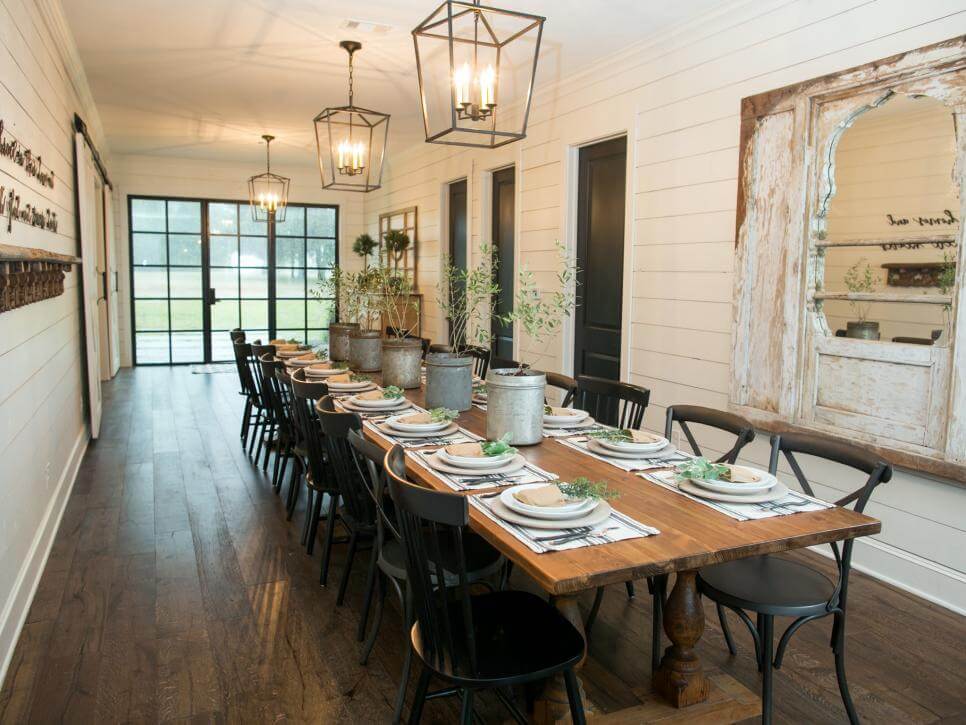 This long table is done in reclaimed wood by Clint Harp for the tv show Fixer Upper. It may have been barn siding or the floor in an old school house. Imagining the earlier role of reclaimed wood is part of the appeal.

Is A Reclaimed Wood Countertop a “Green” Option?

The simple answer is yes, it’s a very “green” option. Because reclamation is mostly hands on there’s little in the way of fossil fuels used in the process making it quite possibly the greenest option available in the countertop market.

The reward of using a reclaimed wood is also the satisfaction of seeing a quality resource given a useful place that adds warmth and beauty to any home. Though it may not be as recognizable as an artifact from a national battlefield or historic building this old wood has played a significant roll in history. Whether it rocked the floor of a dance hall or kept the rain out of a one room schoolhouse it brings a whisper of the past when recruited into duty as a counter or table top.

How Much Do Reclaimed Wood Countertops Cost?

At J. Aaron we charge around $140 per SF for reclaimed wood tops at the time of writing this post. It’s not a perfect formula as things like final size, shape, species, etc. play their roll but it gives you an idea. If you’d like a written quote we’d be happy to provide you with one. 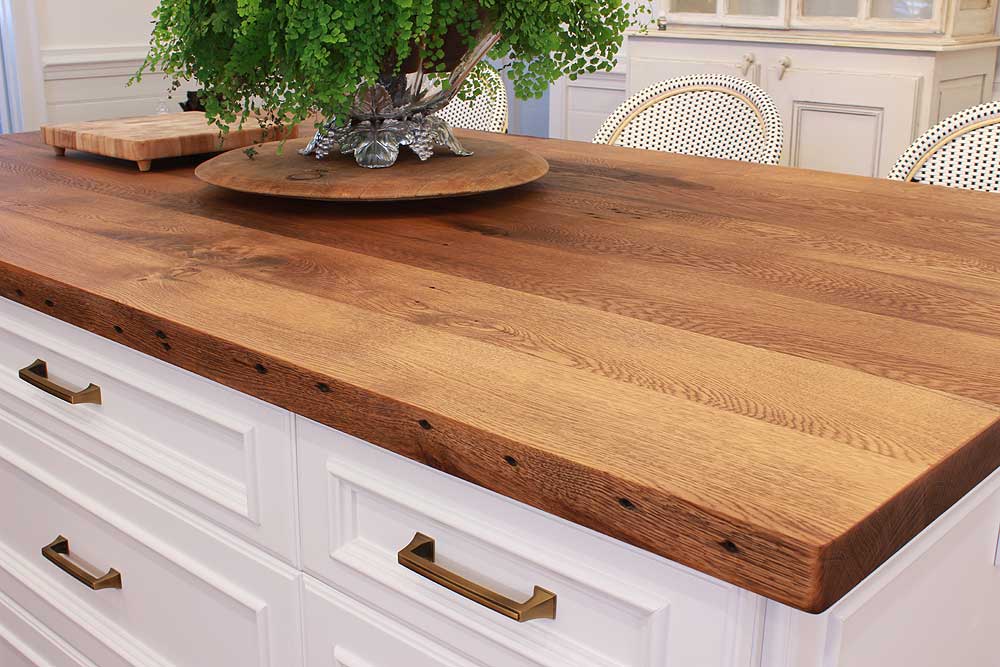